When Arjun entered the observation deck, he was surprised to find Britta there with Bateson. Bateson smiled knowingly.

“I hope you do not think me nosy, but I noticed that you and Britta had been getting … familiar over the journey out, and so I invited her to join us,” Bateson said. Arjun could feel his cheeks getting red. Glancing over at Britta, he could see that she was having a similar reaction. She ducked her head away from his gaze, but he also saw the quirk of a smile on her face. Bateson sensing the tension decided to change subjects.

“It should not be long now by my estimation. Come join us at the viewport.”

Arjun went over to stand between Bateson and Britta. The viewport was positioned near the front of the Fortress-class dropship and offered an expansive view of the cosmos extending beyond them. Seemingly millions of stars twinkled at Arjun. He knew that humans lived on some of those stars. For all he knew one of them might be Terra itself, or even Sheratan. The thought of his childhood home brought an uncomfortable sensation to Arjun’s stomach.

They had been moving to the outer edges of the system for more than two weeks now, well beyond the usual time required to clear Irece’s gravity zone. Bateson had insisted on a haphazard route well past the usual jump line in order to avoid any Combine units that might be tracking them. It was difficult to hide in space and so long as they were under thrust, they would be visible. The previous day, they had cut the deceleration and gone on the float. They used maneuvering thrusters only to slightly adjust their trajectory toward their target.

Arjun stretched his aching muscles. By necessity much of trip had been experienced at 1.5Gs or more and he could feel it in his body. He was young and used to space travel. He knew that many of the refugees would have it much worse. Getting to their destination would not fix all of their problems, but it would give them a chance to tend to sore muscles and wounds both psychic and physical.

He realized suddenly that he was holding Britta’s hand and she was squeezing it tightly in anticipation, anxiety, or something in between. Suddenly, he saw new stars appear not more than three hundred yards away. No, not stars, lights. The dark of space was suddenly lit up by the floating bulk of two enormous and spindly jumpships. One by one, their warning lights lit up from bow to stern. Over the intercom, a new voice greeted them.

“Welcome home, Nova Cats and Republican Forces alike. You have found friends and refuge. As you can see, we left the light on for you.” Arjun recognized the voice of Commander Paul Orpilla, captain of the Knight’s Pride. He looked at Britta. She was beaming as tears rolled down her cheeks. Arjun realized his own cheeks were wet. Modesty forgotten, they embraced and kissed. They made it. They were safe.

All personnel were required to stay aboard their dropships after docking because the jumpships immediately prepared for jump. Concerned that a clever Combine official might work out their location, they did not want to wait around to find out.

The jump left him feeling slightly woozy, but Arjun was still the first out of the airlock and on board the Knight’s Pride. He skipped waiting for the elevator. Familiarity with the ship meant that he could quickly find his way via access tunnels to the parallel docking port of the Knight’s Eyrie – the Leopard-class dropship currently holding his sister, among other things.

As it turned out, he never made it to the Knight’s Eyrie. As he dropped out of the final access tunnel into a wide corridor, he nearly knocked over Tess Nostra-Guardbaum.

Escape from Irece: The Royal Stowaway

It was several hours later when Arjun finally returned to the mech bay. The swelling on his forehead had gone down and he had finally spoken with his sister over tightbeam. It had been good to hear her voice and to have someone to share in his personal grief. As expected, she took the stoic approach, just like their father.

He returned to the mech bay ostensibly to check on the condition of his father’s Peacekeeper mech. However, another issue was tickling the back of his mind, almost forgotten in the recent rush of events. He needed to be sure.

Escape from Irece: Void of Sorrow

A gentle hand on the shoulder brought Arjun back to his senses. Turning, he saw the kindly face of Scientist Bateson, who wore a sorrowful gaze.

“I am sorry for your loss, Arjun. Truly it is a loss for all of us.” Bateson paused. “Someday in the future when Clan Nova Cat rises again, your father will be honored among my people as a savior. His memory will not be forgotten.”

A spark of anger flashed through Arjun. He turned and batted Bateson’s hand off his shoulder.

Arjun could feel the sweat slowly trickling off the end of his nose as he and his unit waited in a clearing, surrounded by trees, still holding on to their gold and red leaves in the autumn of Irece’s northern hemisphere. The rest of their small force lay not three clicks away, behind the imposing walls of a military spaceport. Since their previous engagement, the Republican forces had been able to avoid any further entanglements., but that relative calm was likely to end soon. The commtower at the spaceport had just reported that a battalion’s worth of Drac troops had broken off their approach of the spaceport to make an about face and form a defensive line. The Dracs knew they were coming and were waiting for them.

Arjun shifted impatiently from foot to foot as he waited outside the service entry. The other mechwarriors had busied themselves with their machines. He saw Reggie hard at work on the foot of his Lament mech, while Vanja ran diagnostics through her hand computer on a mech that looked to be the mirror image of Reggie’s. The two Knights Errant shared mechs of the same design. Scuttlebut was that they shared other things too. Further away, he could make out Nova Cat techs swarming like bees over his father’s Peacekeeper, although he couldn’t make out what they were doing. As far as he knew his father’s mech was in perfect condition but he was too frustrated to be even mildly curious.

A scream tore the air above him as a Nova Cat aerospace fighter flew overhead towards the front lines. 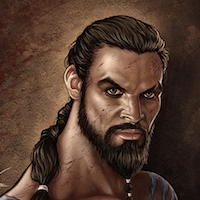 Arjun Nostra is one of the most famous mechwarriors in the history of Clan Nova Cat, despite the fact that he spent most of his life and achieved his most noteworthy victories outside the cockpit of a battlemech.

Arjun was decanted from a steel womb in 3026, twenty-three years before the beginning of the clan invasion. He performed particularly well in his sibko and completed his Trial of Position with the rank of Star Commander. He also developed a deeply mystical outlook on life in which he relied so heavily on vision quests as a guide to life that even many of his Nova Cat peers found it somewhat off-putting.

Once he earned a place in the Touman with the 44th Nova Cat Cavaliers, Arjun also proved to be an ardent member of the small Crusader faction within the clan.